Bad Dadu is a professional daddy blogger –  The baddest dad in town. I’ve sired two boys which technically does make me a dad. Having sons is the only criteria of being a dad I fulfill. That and arrhythmic dancing. Sometimes I feel more like an inadequate uncle. 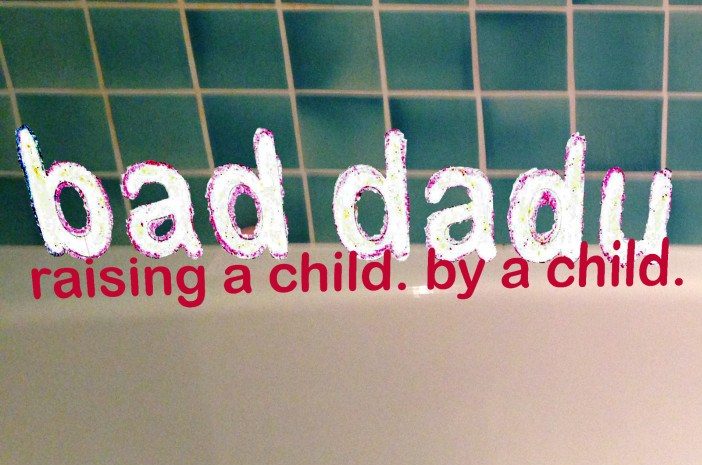 Curiously the most upsetting thing for me watching my sons teethe wasn’t the obvious pain they were suffering. It was their apparent sense of confusion, even a sense of panic. Teeth had obviously come as a bombshell, like they were being attacked from within. They’d spent the first months of their lives in lovely gum-only innocence, only to be violently interrupted by an onslaught of sharp bony blighters bursting into their mouths uninvited.

They were yet to understand that their teeth had actually arrived to help them, and that they could collaborate on all sorts of fun projects: producing cute smiles, chomping down on delicious crunchy food and eventually generating income from charitable tooth fairies. At that moment teeth were just tiny white intruders bent on causing agony.

The appearance of choppers was just the start of a sequence of events which turned each of my children into a sad wet shambles. Teething is like chaos theory, except in miniature. Instead of butterflies’ wings and earthquakes in China, it’s new teeth and poorly bums. The process is not just confusing to the child. I need to explain.

My sons’ first reaction was instinctive, as everything is at that age. This was to stuff their hands into their mouths. Perhaps they were trying to push the teeth back from where they came. Fingers versus gnashers, civil war initiated. The effect of these skirmishes was a steady torrent of drool from the mouth.

They both also had very red cheeks, irritated by the gums beneath. The cheek situation was worsened by the waterfall of dribble sploshing over it and created a vivid red, uber-red, almost beyond human comprehension. Like they’d broken into my grandma’s bedroom and applied her entire supply of rouge.

Of course the most bewildering aspect of the teething experience were the bottom issues. My older son suffered diarrhoea and a sore bum like he’d gone a few rounds with a vindaloo. This didn’t seem like a logical consequence of new teeth poking through. So I researched it on the internet. It seems that most of the parenting community are confused too. The most popular suggestion is that digestive problems are as a result of bacteria attached to something they’ve shoved in their mouth to ease the pain.

So along with the teeth and the gums, he was struggling with his face and his backside. It was a shemozzle of symptoms that led to a chronic lack of sleep. And the fatigue left him vulnerable to a cold so along with the tears from his eyes, the spittle from his mouth he also had snot coming from his nose. Let’s say he had a fairly damp face.

Of course his mother and I were keen to alleviate his distress in any way we could, just so he could steal a few hours of restorative sleep. A bizarrely disparate array of objects were proffered to him: a set of very cold plastic keys, a frozen banana, a small rubber giraffe from France. Each one gave temporary relief but it was not a sustainable solution. A child cannot sleep and chew a small rubber giraffe from France at the same time.

That was when we reached for teething powders. As ever my wife had checked all the online parent forums and heard about Ashton & Parsons. I liked them because they’d been around so long, since Victorian times. I’m guessing it was introduced to help Victorian parents with their “children should be seen and not heard” policy. When a child is teething they can most definitely be heard.

But it seems that Ashton & Parson’s longevity is well-founded, as are the opinions of the mums and dads discussing teething online. Both my sons lived to tell the tale and now have a fine set of well-behaved gnashers that they get along very well with.

I haven’t told them yet about root canal surgery though.